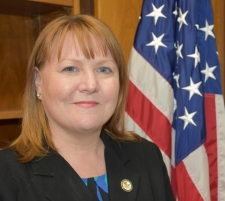 Tracy Wilkison is the United States Attorney for the Central District of California, the chief federal law enforcement officer in this district which covers seven counties and over 19 million people. She supervises the largest U.S. Attorney’s office outside of the District of Columbia, with over 500 employees, with approximately 250 attorneys in four litigating divisions: Criminal, Civil, National Security, and Tax. She previously served as the First Assistant United States Attorney and the Executive Assistant United States Attorney. Prior to joining senior management, Ms. Wilkison was the Chief of the Cyber and Intellectual Property Crimes Section within the National Security Division of the United States Attorney’s Office. In that position, Ms. Wilkison prosecuted federal cyber crimes arising from computer hacking, Internet fraud, identity theft, cyber stalking, Internet piracy, theft of trade secrets, and the sale of counterfeited trademarked or copyrighted goods. She has prosecuted several high-profile cyber cases, including a case against a sextortionist who victimized hundreds of young women and who was referred to by the judge as a “sexual cyber terrorist,” cases involving the use of malware to gain access to the computers of well-known companies and celebrities, and a case wherein extremely valuable trade secrets were stolen and distributed to competitors. She also led the team in the Apple litigation following the San Bernardino terrorist attack, and supervised the team investigating the Sony cyber attack. During her 22-year tenure in the U.S. Attorney’s Office, Ms. Wilkison has also been a Deputy Chief of the General Crimes Section, where she trained new prosecutors, as well as a member of the Narcotics Section, where she prosecuted large-scale drug trafficking cases. Ms. Wilkison graduated from the University of Maryland and Harvard Law School. She clerked for the Honorable Franklin VanAntwerpen, District Judge, Eastern District of Pennsylvania, and worked for Quinn Emanuel Urquhart & Sullivan before joining the office.