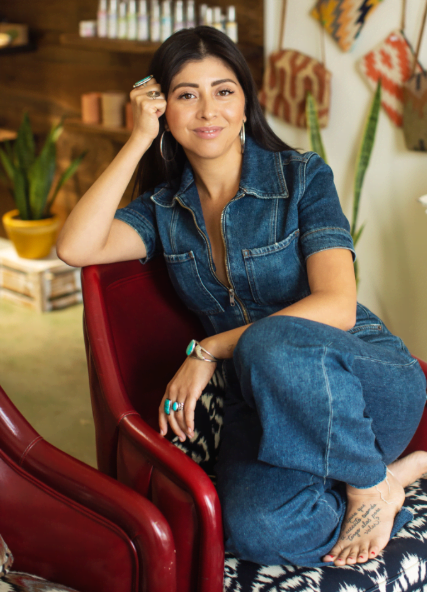 Adina Diaz, entrepreneur, aesthetician and certified reiki master, launched her eco-friendly candle line, the Guided Flame Co., in 2020. A manifestation of Adina’s love for all-organic ingredients and her innate ability to nurture those around her, the Guided Flame Co. was dreamed up as a way for both Adina and others to practice sustainability and honor their spirituality, all while releasing positive intentions into the universe. Born to parents of Mexican and Native American descent and raised in the healing desert landscape of Arizona, Adina has been paying homage to her ancestral roots and drawing upon her connection to the natural world since an early age. Adina (who, as a child, could be found making her own botanical blushes and balms with the fruit of prickly pear cacti) received her formal aesthetician training and began her career in her hometown of Tucson before moving to Los Angeles in 2008. Here, she made a name for herself as one of the city’s most in-demand holistic aestheticians. Employing all-natural, vegan and organic product lines, Adina infuses her skincare work with energy and sound healing, making each customized treatment equal parts therapeutic and experiential, and altogether unforgettable. In 2014, Adina debuted her eponymous studio, Adina Diaz Your Skincare Guru, in Beverly Hills, followed by her now-shuttered brick-and-mortar Natural Feeling Spa and Boutique flagship in 2016 in Los Angeles — a welcoming, woman-owned space focused on both providing nourishing skincare and creating a like-minded community forged around eco-friendly ideals. Adina’s hands-on philosophy also guides her latest venture, the Guided Flame Co. With a burn time of up to 80 hours, each fragrant, hand-poured candle is crafted from coconut wax infused with organic essential oils, and features a pure cotton wick. The petal-strewn candles also come with an anointing oil, a matchbook, and an intention-setting mantra conceived by Adina. A self-described “ride-or-die” friend, Adina currently splits her time between Atlanta and Los Angeles. In addition to moonlighting as a social activist, she is also passionate about roller skating, boxing, yoga, thrifting and grounding herself in nature.